Following the announcement by BIS that the new degree apprenticeship standard submitted by the Electronic Systems Community (ESCO) has been approved, GAMBICA has received a letter from Baroness Neville-Rolfe, recognising the achievement and ambition of the activity.

Baroness Neville-Rolfe, whose Minesterial role is Parliamentary Under Secretary of State for Business, Innovation and Skills, referred to the achievement as a "significant milestone" and thanked all involved for their hard work and progress made in a short time period. 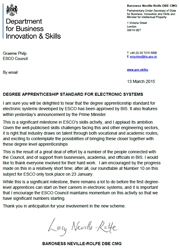