LAST MONTH’S GAMBICA awards celebrated both the rising stars of the industry and saluted those who have contributed to the GAMBICA community and wider industry. The nominees amply demonstrate that we have members with energy and enthusiasm and who really put back into the industry for the benefit of others. The Rising Stars award entries also show that we have a bumper crop of talented and able young people poised to take the industry forward.

Nominees for the GAMBICA Industry Contribution Award were:

Charles Pascal, of Alphalabs, nominated for his dedicated work on standards committees over many years and for his readiness to help fellow exhibitors on GAMBICA pavilions overseas for many years.

David Pomeroy, of Monmouth Scientific, used his position on BSI committees to ensure that moves to enact changes which would have seriously increased costs for UK companies were not successful.

Iain Lindsay, of Rockwell Automation, nominated for his work on GAMBICA’s environmental regulatory group and for his development of guidance, not only for GAMBICA members, but for the European Commission too.

Stephen Aldersley, of Goodfellow Cambridge, nominated for his contribution to the lab tech management committee, to the Board of GAMBICA, and for his unfailing willingness to share his extensive experience and knowledge with fellow members of the Export Group.

The overall winner of the award was Iain Lindsay. Our congratulations go to Iain, and all the nominees who have made such a magnificent contribution to GAMBICA and its members over the years.

Nominees for the rising star award were:

James has been with Porvair for only 18 months but quickly went from shadowing a colleague to project managing all the chromatography projects at Porvair. He successfully contributed to the development and launch of six new products and is close to launching a further ten. When James first joined the company and found issues with locating items in the laboratory, he designed and implemented a chemical tracking list that is now used by the wider development team. James has been able to present his work in a confident and professional manner to customers which keeps projects to deadlines and leads to successful outcomes. James had previous IOSH experience and pursued his formal qualification when he joined Porvair, he regularly reviews risk assessments from different depts which was outside of his expected role but does not impact his development work.

Joe is described as the lynchpin in Markes’ mass spectrometry and data processing product lines, managing the product development process and with his team serving as the last line of defence for product-related issues.  With his strong background in maths, physics, and chemistry, Joe is also a well-respected technical contributor to the product development team.  And the sheer volume of work that he undertakes is also impressive.  His colleagues say Joe is an extremely positive, fun and personable individual, in work and in life in general: a stand out quality in itself.

Josh joined Priorclave without a science, sales or export sales background but very quickly learned the product, the business systems and how to deal with people in different countries and cultures of the world. He has taken orders from countries ranging from Lithuania to Vietnam, South Africa and Libya and has built relationships across cultures. Josh has excelled in customer service, reading markets effectively and keeping customers happy with both the products and services Priorclave provides – always finding time for following up with customers and completely lives the ideal that after-service is more important than the sale alone. Josh now regularly deputises for the sales director of Priorclave and has become a central part of a small, close knit team. His colleagues describe Josh as reliable, confident and likeable and note that he makes friends wherever he goes.

With a quiet and undemonstrative style, Shaun has in a short time won the respect of experienced colleagues in engineering and sales with his knowledge and professionalism.  B&R’s UK Leadership team have identified him as having management potential, impressed by his working style that always ensures tasks are finished to a uniformly high standard with all documentation and CRM records completed. Shaun stands out from the crowd because of his technical knowledge -  and willingness to expand his knowledge base to include new and innovative products and industry technology trends. During lockdown Shaun was lead engineer on a complex robotics and automation project for a major supermarket.  He project-managed a cross-supplier team of four companies during design and then on-site for commissioning and acceptance tests. The project was delivered on-time and on-budget. The end customer was so pleased with the results that future projects have been sanctioned.

Tony joined Avidity Science as a storeman seven years ago and quickly began contributing to warehouse management, showing initiative and ability to understand and work with all areas of the business. With a natural ability to multi-task and remain level-headed under pressure, despite constant urgent and reactive despatches to customers, Tony treats all his colleagues with respect even when the highest pressure is applied. Tony has shown great ability to identify and address sub-optimal processes and to coach his team and peers to accept change and implement new processes together; improving the Sales Order, Engineer Car Stock and Picking/Despatching Processes over a short period. When new requirements arise, as they have recently in the changing world of Export Logistics, Tony has ensured that he has the information and knowledge to make this area of the business a success, taking responsibility for his own learning as his role expands.

Victoria has been in her current role of Head of Operations for less than a year, during which time she has demonstrated the ability to step up a level within the organisation and become a valuable member of the senior leadership team. This first year has been challenging and Victoria has faced significant operational and people challenges. She has built strong relationships with colleagues, not only in her immediate team but also with related teams throughout Avidity’s global organisation, demonstrating a high degree of empathy and frequently identifying and addressing the potential impact of decisions on individuals.

Eloquent and professional, Victoria not only delivered a very well thought out strategy plan to the CEO, she identified key issues in Avidity’s quality testing strategy, designing and implementing a robust resource and task management program within 24 hours to overcome all existing issues. This allowed the company to successfully exit a quality alert status significantly quicker than anticipated.

Victoria instigated, planned and actioned the move of Avidity’s entire production facility and team from a satellite site to its main site. This involved costing, presenting the plan to the CEO to gain investment from the business, as well as engaging the entire company team around the benefits of the move.

Our congratulations go to all the nominees who clearly are of huge value to their companies and to the reputation of the industry as a whole, and in particular to the overall winner of the rising stars award - Josh Walker. 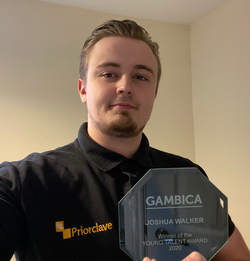