GAMBICA Index shows 0.6% growth for 2015 – a mixed performance across sectors and markets

The GAMBICA Index is an indicator of the level of business for our Industrial Automation, Process Instrumentation & Control and Laboratory Technology sectors. It shows the levels of all 3 sectors individually and combined, using the 2006 data as a reference point. 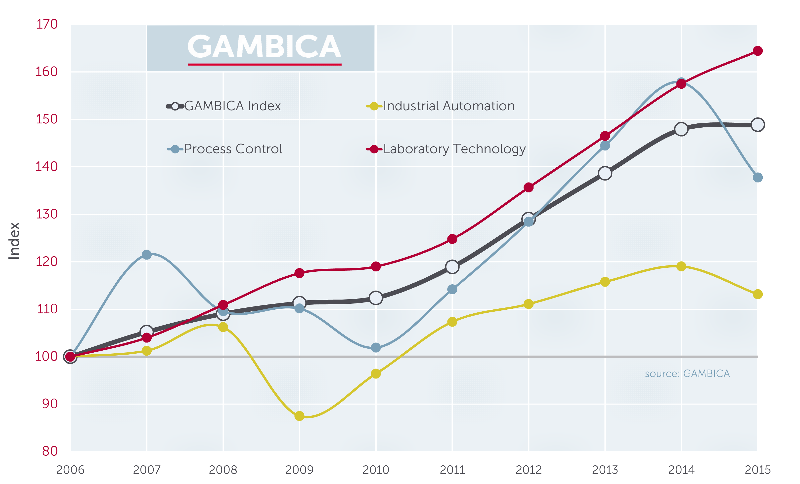 The combined GAMBICA Index shows a 0.6% growth in 2015, the lowest rate of increase in the nine years of collecting the data. However this is against a backdrop of instability with external factors such as political uncertainty, low oil prices and exchange rates having an impact, with some sectors more adversely affected than others.

After enjoying several years of high investment, the Process Instrumentation & Control sector showed a steep decline of around 12% in 2015 after the oil price effectively halved from around $100 per barrel to around $50 at the end of 2014, causing many major projects to be put on hold. It dropped again at the beginning of 2016 to $30 but has since recovered to just under $50. If there continues to be an oversupply, only projects using low extraction cost processes will be viable.

The Laboratory Technology sector grew at 4.4% for 2015, a slight decrease on the previous year’s 5.5% growth. The UK market grew at a reduced rate compared to 2014, while exports increased compared to the flat year seen in 2014. Overall since 2010, when the market grew by a marginal 1.4%, we have seen average growth of over 5% each year.

After a steady recovery since the 2008/09 economic crisis and 5 years of growth, the Industrial Automation sector saw a decline in 2015 with a decrease of 4.9% compared to 2014, dropping below 2013 levels.