GAMBICA Index shows 5.2% increase in 2016 - growth across all sectors

The GAMBICA Index is an indicator of the level of business for our Industrial Automation, Process Instrumentation & Control and Laboratory Technology sectors. It shows the levels of all 3 sectors individually and combined, using the 2006 data as a reference point. 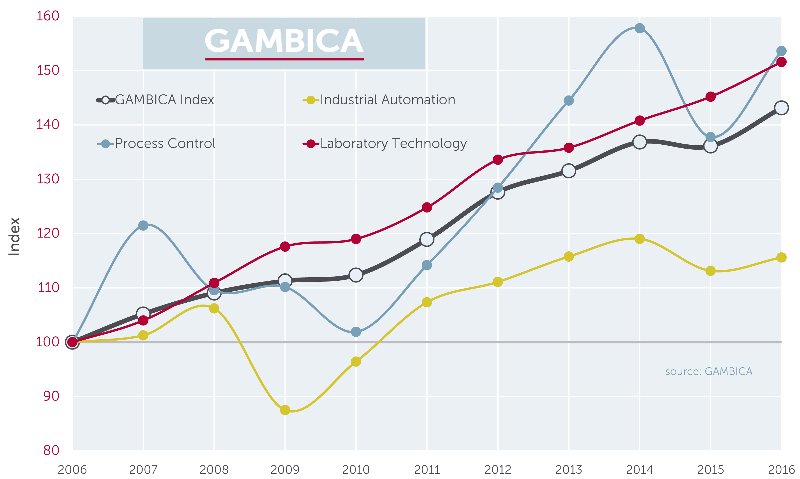 The combined GAMBICA Index shows a 5.2% growth in 2016, the strongest rate in the last 4 years and a recovery from the dip in 2015. Factors such as increased exports, UK investments and restarting major projects that were postponed in 2015 have contributed to all 3 sectors showing growth in 2016.

The Process Instrumentation & Control sector has recovered from the sharp decline in 2015 caused by the oil price crash and the growth this year is significant at almost 12%. While the Oil & Gas market has made small recoveries, mainly on activities in the service and spares markets, the growth is largely attributed to increased investment in water, waste, food & beverage and pharmaceuticals.

The Laboratory Technology sector saw its strongest growth for 4 years at 6.4% in 2016, with both UK and export sales growing at an increased rate compared to 2015, Overall the last 5 years have seen an average growth of over 5% each year in this sector.

The Industrial Automation sector returned to growth in 2016, with a 2.2% improvement on the previous year. This is due to the low sterling exchange rate which boosted sales in Q3 and Q4 and some relief from the political and economic uncertainty that was largely thought to be the cause of the 2015 downturn.