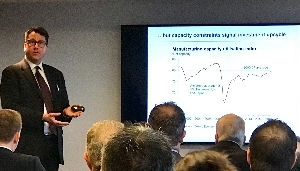 At Gambica’s recent Political and Economic Update, Oxford Economics alerted delegates that both the Bank of England and the Treasury were obliged to release their forecasts for economic performance under the ‘May deal’, ‘no deal’ and ‘no Brexit’ scenarios, which they did less than a week after the event. Oxford Economics’ own work agrees with both the Bank and Treasury predictions that the ‘no deal’ scenario will result in worse economic performance for the UK than the deal scenario and that both outcomes are significantly worse than in the no Brexit scenario.

It is extremely difficult to build business plans said Andrew Goodwin, Assistant Director of Oxford Economics, when faced with hugely different economic forecasts for the deal and no deal Brexit scenarios which both have similarly high probabilities of occurring. He noted that the Brexit risk to trade is an asymmetric issue. While 50% of our exports are to the EU and over 50% of our imports come from the EU, no other single EU country would be so badly affected, and particularly not Germany or France. He predicted an initial sharp drop in asset values and Sterling down to 1.10 against the dollar and near parity with the Euro. The Euro will weaken against the dollar too. Andrew answered numerous questions from members.

The Oxford Economics written report is available only to GAMBICA members - if you did not attend the event, it can still be purchased at a cost of £160 - please contact Sarah Wicks by email or call 020 7642 8080